From Sonic Archive
Jump to: navigation, search
SONIC THE HEDGEHOG
Sonic the Hedgehog

Sonic's journey began when he sought out to rescue the animals of South Island from Dr. Ivo Robotnik's scheme to use them to find the Chaos Emeralds. Since then, sporting a strong sense of justice and a confident attitude, he journeys to preserve peace and protect the innocent, and regularly faces off against adversaries like the evil Dr. Robotnik, now going by "Dr. Eggman". He has fast reflexes and fights by curling into a ball and attacking enemies.

Before Sonic the Hedgehog[edit | edit source]

Sonic was born on Christmas Island. At some point, Sonic met Dr. Ivo Robotnik, and they have been enemies since. 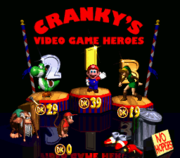 Sonic's trademark shoes are shown in the bottom right corner next to the trash can, as well as Earthworm Jim's plasma gun

In the Cranky's Video Game Heroes awards ceremony in Donkey Kong Country 2: Diddy's Kong Quest, Sonic's shoes and Earthworm Jim's plasma gun can be seen next to a trash can, along with a sign saying "No Hopers." This detail was removed for the Game Boy Advance remake, which released after Sega became a third-party.

In Mario Kart 8 and Mario Kart 8 Deluxe, Sonic's artwork from Mario & Sonic at the Olympic Winter Games is seen on the Mii Racing Suits screen. If the player scans a Sonic amiibo onto the NFC Touchpoint, a racing suit stylized after him becomes accessible, and can be used on the Mii.

Sonic's amiibo is also usable in Yoshi's Woolly World and Poochy & Yoshi's Woolly World. The player can scan it to unlock a Yoshi appearance designed after Sonic, sporting blue skin with flesh-colored arms and chest, Sonic's shoes and gloves, and green eyes. Tapping in the amiibo causes Yoshi to instantly take on this appearance, although it can be switched to at the amiibo Hut if it has already been used.

In Super Mario Maker, Sonic appears as a Mystery Mushroom costume, which can be unlocked by clearing 100-Mario Challenge on Expert difficulty or by tapping Sonic's amiibo onto the Wii U GamePad. It can only be used in Super Mario Bros. style. Sonic's sprite is 16-bit, and is based on his sprites from th this makes it the only costume in the game to not be 8-bit. Collecting the Mystery Mushroom giving the player this costume plays the 1-Up tune from the 1991 game Sonic the Hedgehog, and all of Sonic's sound effects are taken from the original games. Pressing Up on the D-Pad causes Sonic to look up while the Ring-collecting sound plays.

Sonic's "course clear" and "lose a life" fanfare are the course clear and game over fanfare, respectively, from Sonic the Hedgehog 3.