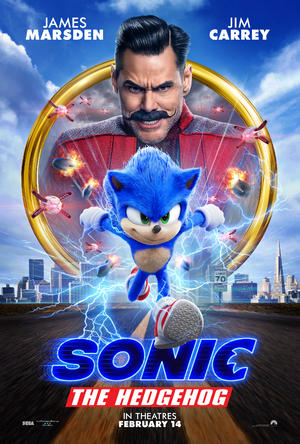 "Every Hero has a Genesis."
Tagline

The film initially began production in 2013, when Sony Pictures Entertainment acquired the rights to distribute a film based on the series. The film was officially announced by Paramount Pictures (which had since acquired the rights) and Sega on April 30, 2019. Sonic the Hedgehog released in theaters on February 14, 2020.

A young Sonic, born with incredible speed, races through his island home to Longclaw, an owl that has taken the young hedgehog in and protects him. Despite his speed, he's been caught by a tribe that seeks to capture him and take his power. Longclaw takes Sonic and attempts to flee, but she's struck down by an arrow. Longclaw quickly uses a gold ring to summon a portal to another world. She gives Sonic a pouch with several gold rings, tells him to keep running away from those who seek his power, and pushes him through the ring. Before he's able to get back to Longclaw, the portal closes, and Sonic finds himself alone.

Ten years later, Sonic has adjusted to life on Earth, in the small town of Green Hills, Montana. Despite the fun he has, he finds he's still very lonely, and on one evening after playing baseball on his own, he begins to run around the bases repeatedly, increasing his speed and power. Finally, his power bursts, causing a power outage over the Pacific Northwest.

In response to the unexplained outage, the United States government decides to send the brilliant Dr. Robotnik to Green Hills to investigate. Dr. Robotnik sends his egg-shaped robot drones in search of whatever has caused the outage, and finds a footprint of an animal that his computer is unable to identify. The military begins to scour the nearby forest, where Sonic is hiding out. Panicked, Sonic races to the cave where he's been living and begins to get ready to leave earth for a mushroom planet on his map, but the government soon closes in on his location. Instead, he races to the garage of the nearby sheriff, Tom Wachowski, to use the gold rings without being seen. Tom, who has recently learned he had been accepted for a job as a police officer in San Francisco, hears the rustling in the garage and heads over with a tranquilizer. When he finds Sonic, they both panic, and Tom shoots him. Sonic, dazed, notices the San Francisco skyline on Tom's shirt as he begins to lose his balance and drops his gold ring, opening a portal to the Transamerica Pyramid illustrated on the shirt. Sonic then loses his grip on his bag of gold rings, and they fall through the portal onto the roof of the building before the portal closes, as Sonic passes out.

Sonic awakens in a cage on Tom's dining room table, but before they can discuss what he's doing there, Sonic finds the military closing in on Tom's home. Tom goes out to greet Dr. Robotnik, who is snooping around the outside of his house, while Sonic hides in the attic. While Robotnik attempts to outsmart Tom into letting him inside, he sends his egg drones to search for Sonic, and two of the slip into the attic through an open window. Sonic panics, and he accidentally rolls down the stairs into the living room just as Robotnik was leaving. Unamused by Tom's lies, Robotnik forces his way in, but only finds raccoons on Tom's table. Before he leaves, however, he notices one of Sonic's quills, which Tom had found days earlier, and threatens Tom, prompting Sonic to appear from where he's hiding. Robotnik freaks out, giving Tom enough time to punch him, after which they both destroy Robotnik's drone and escape in Tom's truck just as Robotnik's assistant, Agent Stone, and the military arrive at the home.

Tom drives Sonic out of town, who asks for his help in retrieving his rings from San Francisco, but Tom refuses until Sonic reminds him that he's still there because Tom shot him. Tom then obliges and together, they begin to journey to San Francisco to retrieve Sonic's bag of rings. While stopped at Piston Pit bar, Tom calls Officer Wade Whipple in Green Hills, but finds that Dr. Robotnik is already at the police station. Meanwhile, contrary to Tom's instructions, Sonic has left Tom's truck and curiously goes to the Piston Pit. Tom finds him there, and they both stop to eat there. While crossing items of Sonic's newly-written bucket list, they get into a bar fight. During the fight, Sonic moves really quickly to easily defeat everyone in the bar, allowing them to escape. They stop to rest at a hotel, where Sonic discusses his hesitance to leave earth, and Tom finds he's being accused of terrorism.

Meanwhile, Dr. Robotnik and Agent Stone arrive at the bar and begin interviewing those there. Robotnik is able to identify Tom and Sonic's location based on the witnesses, and sends his tank after them. Sonic and Tom, already in California, begin to discuss Tom's bucket list, and Sonic begins to argue over Tom's desire to leave Green Hills. During their argument, Robotnik's tank launches a harpoon at the truck. After Sonic accidentally defeats it by rolling into a ball and crashing into it, the tank engages another vehicle which gives chase to the duo. Sonic and Tom defeat three more of Robotnik's robots before having to deal with a small but powerful bomb that gets attached to Sonic. After pulling over, Sonic and Tom finally get it off, but Sonic doesn't move away from it when it explodes, knocking him out.

Meanwhile, frustrated that the two survive, Robotnik notices Sonic's quill inside Agent Stone's jacket, which he had picked up at the Wachowski residence. Robotnik begins to analyze the quill, and finds it to hold unlimited energy. Realizing he can use it to power his robots, Robotnik departs in his manned drone with his robots to find Tom and Sonic.

Tom finally makes his way to his sister-in-law Rachel's home, where Tom's wife, Dr. Maddie Wachowski, has been, and explains what's happened. Maddie uses smelling salts to awaken Sonic, and Maddie's niece, Jojo, gives Sonic a pair of red shoes, before they take Rachel's car to the Transamerica Pyramid. There, Tom lies about a jumper on the roof to gain access to the roof and he, Maddie, and Sonic retrieve Sonic's bag of rings. Sonic begins to leave, thanking Tom for saving his life, before Robotnik suddenly appears. Sonic mocks his egg-shaped drones, calling him "Mr. Eggman", and Robotnik prepares to attack. Sonic then pushes Tom and Maddie off the roof, and Robotnik launches his attach on Sonic, but Sonic once again moves really quickly in order to destroy the drones. This time, however, Robotnik is able to keep up with Sonic thanks to Sonic's quill. Caught off-guard, Sonic quickly uses a ring to get Tom and Maddie back to Green Hills before he himself hits the ground.

Pushing back against Robotnik's taunts, Sonic gathers himself and begins to run, using his rings to travel to other parts of the world in an effort to out-run Robotnik. When they arrive in the Egyptian dessert, Sonic attempts to blind Robotnik by running around him in circles, kicking up the sand, but Robotnik soon sees him and hits him with a blast just as Sonic uses a ring to return to Green Hills. The blast knocks Sonic out as Robotnik enters through the portal. Tom, who with Maddie is nearby, notices Sonic's dropped his bag of rings, and uses one to make his way atop Robotnik's manned drone as Robotnik prepares to attack Sonic again. Robotnik is able to shove Tom off and questions his loyalty to the alien hedgehog. Tom, however, remarks that Sonic knew more about living on earth than Robotnik ever would, and that Sonic was his friend. This causes Sonic to awaken, and energy to build up. Rather than run, however, Sonic decides to use his power to protect his friends, and he and Robotnik engage in a battle. Sonic begins to bounce against the buildings into Robotnik's drone, causing heavy damage. Tom uses another ring to summon a portal to the mushroom planet, and Sonic tells Robotnik that he instead would leave earth, as he curls up into a ball and forcefully hits Robotnik's drone into the ring portal.

Sometime later, Tom and Maddie are repairing their home, damaged by Robotnik's first visit, when Vice Chairman Walters, who had initially sent Robotnik to investigate the power outage, arrives to thank them for not discussing recent events, giving them a gift card to Olive Garden. He also inquires on Sonic's location, but Tom and Maddie insist they haven't seen him. Once he leaves, Tom and Maddie take Sonic, who had been hiding in the living room, to his new room in the attic, where Sonic finds all his things from his cave.

Sometime later, Dr. Robotnik shaves his head clean and notes his grip on sanity is firm before throwing a stone he's named Agent Stone across the mushroom land for "rock-connaissance". Noting that the situation he's in would kill a lesser man, Robotnik pulls out Sonic's quill, and claims he'll be home by Christmas before continuing his journey through the mushroom land.

Sometime after Dr. Robotnik and Sonic's fight, a giant ring appears in the hills above Green Hills, and a two-tailed fox emerges. Looking at a gadget, he remarks that he believes he's found him before using his tails to fly into town.